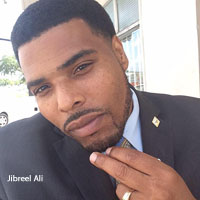 With the race for District 5 commissioner coming to an end with the General Election on Tuesday, November 7, I thought that I would jot down some of my observations of the candidates. I'll start with the worst candidate, Jibreel Ali.

7. Jibreel Ali has no vision and is unable to critically think. Ali also lack moral character and will lie or say whatever he believes will make the listener like him. Jibreel talk about wanting to work with community leaders, however he spends his time criticizing everyone and everything without offering a potential solution for anything. He has done nothing himself and his claim to fame is perceived past successes of some family members.

Jibreel Ali and the pathetic liar, T. J. Legacy organized a 'Water for Flint' project. The word is they spent as much money on gas,

food and housing getting to and from Michigan, as was spent on the water itself. Obviously, Lagecy drank plenty of that donated water during the road trip. This was nothing more than a photo-oped 'watered down' campaign, but it shows the failing management style of Jibreel Ali.

6. Ericka Dunlap is the second worst candidate. Ericka Dunlap is a great presenter and speaks very well. I have read her campaign literature and listened to several interviews that she has given and I have yet to see an original idea from her. If she was to become commissioner, she will focus on appearance of the neighborhoods and not necessary the quality of life of the people. She wants people to look better, rather than 'be' better. Dunlap will probably paint Parramore Streets in bright pastels while the people live in squalor. Ericka Dunlap's idea for improving D5 is a dangerous concept for the residents of our poorest neighborhoods. Unfortunately, Ericka presents the 'look better' idea very well, but she provides no substance to accomplish even that task.

5. Lawana Gelzer is the third worst candidate. On the ballot, Lawana's name will show as Betty Gelzer, but let's be real. Lawana is another leader with no vision. She is highly educated (her words) but lacks common sense. If you listen to her for more than 15 minutes, she will tell you how much education she has. But, she won't tell you a single strategy to solve any problems that she has been working on for the past 30 years. That is because she doesn't have a solution or an idea for a solution. She can state the problem and she can tell you her idea of who caused the problem. Most of Lawana's conversation is hyperbole. It sounds okay but means nothing. Lawana Gelzer teamed up with the pathetic liar, T.J. Legacy to promote lies about absentee ballot voter fraud. Those continuous lies probably lessen the number of participating voters. The pathetic liar Legacy and the always running Lawana only care about boosting their own images. Yes, Lawana has lost many elections and she thought that by using a different name on the ballot she will have a chance to win. No, Lawanna, you will lose this one too.

4, 3, 2, Sarah Elbadri, Cynthia Harris, Ondria James are much better candidates than the bottom three, but... After reading and reviewing interviews and watching debates of these candidates, I have determined that they have different focuses of the same platform. Take their platforms and shuffle them and hand them back out and you will notice that it really doesn't matter. They are all the same. Like the other candidates, no one has said anything of value. They know the problems and the issues. Ondria James have the ability to explain the problems of the community better than most. Cynthia Harris and Sarah Elbadri tends to focus on specific issues that interest them. No one has a workable strategy to get to a solution that solves anything. Sarah Elbadri, Cynthia Harris and Ondria James are more passionate about fixing the community than Jibreel Ali, Ericka Dunlap and Lawanna Gelzer. None of these six have a plan, but they all have hyperbole.

7. Regina Hill is the best choice for D5 Commissioner. When Regina Hill was running for office 4 years ago, I asked her to tell me what was her plan. She gave me the standard hyperbole. After she was elected, I asked her again to tell me her strategy. Now that she is at the table in city hall, she will always grab something from the table and bring it back to the community.

Regina Hill was elected by the people that needed help, because she campaigned in those neighborhoods. She presented hope to them. She knows their problems because she lived those same issues. Those people who elected her need her badly but those people have nothing other than their vote; they have nothing else.

Regina's constituents gave her their vote but it seemed like community leaders and City Hall were against her. Commissioner Hill's goal in the chambers was to keep the community intact, keep their hope alive and grab as much from the chamber's table as she can to bring back. In the beginning, she grabbed 'Ban the Box' and brought it back to D5. Nowadays, she grabs housing, Black owned businesses, career center incubators and more and bring these wins back to D5. This term, she wants to do more now that she has proven herself and has a plan.

With a little help from community leaders, she can slow down the grabbing and build up the demanding, and win more for D5. Commissioner Hill wants your vote so that she can extend her reach while at the table.

I support Commissioner Regina Hill. She knows the issues and she has a strategy to win for the community.