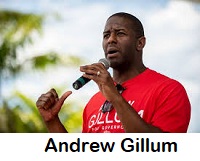 By Attorney Natalie Jackson
Now is the time to get on the #AndrewGillum train. Don't be sad that your candidate lost to Andrew Gillum in the primary. They were good candidates but they were not going to win the general election (the ultimate goal) but Andrew Gillum will win if we all rally behind him. The Democrats had 5 great candidates with solidly democrat platforms. However, only Andrew Gillum is a true progressive and not just a "new" progressive.

Democrats have to win back the "Bernie Democrats" and they have to motive the 3.5 million registered independent voters to actually vote democrat. As nice as all the other primary candidates were, they were not going to do that. Andrew Gillum is the only real choice if Democrats are serious about motivating old and new voters and winning Florida back. Andrew Gillum is the only real "other" in the race, and for once "other" is a great thing.