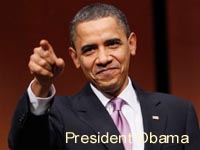 "In two days time, I will be handing the baton of leadership of this Great Nation to the 45th President of the United States, Madam

Hillary Rodham Clinton. She is the singularly most qualified person to handle this awesome responsibility ever elected to the office. And while she has had critical roles very close to the Presidency in the past, she does not know personally how hard it is to govern a nation and lead the world when under constant partisan attack and delegitimization. I do.

It is my sincere wish that the opposition party will look to its better angels and act in the interest of the nation. Unfortunately, at this time, there is no indication that it will. They have indicated that they are poised to undermine, obstruct and burden the future President with investigation after investigation into past acts that have already been scrutinized to a fair-thee-well.

I cannot believe that this will be good for the country or that it will lead to any positive or productive outcome. For that reason, I, President Barack Obama, am exercising the power granted to me by the Constitution of the United States, to wholly, completely and without reservation, PARDON Hillary Clinton for any and all acts that could conceivably be construed as unlawful for any time prior to this date. The right to pardon is absolute in the President of the United States and I am exercising it.

I do this not out of an allegiance to Hillary Clinton, but out of a sincere desire to see the next President able to govern without impediment. This is my right, and I so choose to exercise it. That is all."