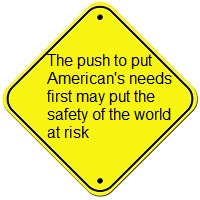 It is a requirement that I listen to her and other Donald Trump cronies; because I have to be aware of the darkness they are determined to take us through. They seem oblivious to the backlash that will be created from the executive decisions being made by their boss. The public unrest in this country is minor in comparison to the destruction that is being done to the partnerships around the world.

Our allies are very concern about the direction the Trump Administration is taking us. The openness to call presently signed treaties and agreement stupid seems to be building a unstable environment for compromise. The push to put American's needs first may put the safety of the world at risk. No fair treaty or agreement can't allow one country to reap all the benefits. Donald Trump is suggesting that the world will have to make sacrifices to put the United State of America in it's rightful place in the world.

How many times can Kelly Annie Canway be trotted out before the public to better convey the statements of Donald Trump. The country can't allow it's staying around the world to deteriorate. Those of us with vision must seek to reinstate sanity to United State of America. The Democrats must regain control of the House and the Senate during midterm elections. Hopefully by this point the damage to our country will be minimized and the power of Donald Trump controlled. Those of you that allow your good judgment to slip have to resend your support of Donald Trump.