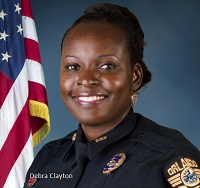 By Attorney Ka’Juel J. Washington
On Monday, January 9th, 2017 a great champion of the African-American community was slain in the line of duty. The outrage was immediate and the village went into a state of mourning. How could Lt. Debra Clayton be dead? She was a part of our culture and our clan. She was born and raised here. When she chose to go to college, she stayed in Orlando and went to UCF. She is the one who held the marches and was a faithful servant. She had been on the force for 17 years and was a jewel of pride. The community loved Lt. Debra Clayton just as it loved Belvin Perry, Sr. and Arthur Jones before her. These two dedicated officers have been enshrined in Washington Shores with bronze statutes.

To top it all off, she had been allegedly killed by Markeith Loyd, a man who the police say killed his pregnant girlfriend and was wanted for Murder. As his face began to be plastered all over the news, the African-American community began to search for him. Crime line became flooded with tips and  Markeith Loyd’s name was all of the talk in barbershops and on social media. Although there was a big ransom for his arrest, for some people, it wasn’t about the money. The community was absolutely outraged and wanted the man responsible to be brought to justice. Killing a pregnant woman and a community police officer is not something that will be tolerated.

So, once he was captured, a sigh of relief and a quiet hush overcame the landscape. People were relieved and could not wait for him to be sentenced for his crimes. But, a funny thing happened to him on the way to the dungeon. It appears as though the fugitive suffered some severe facial injuries during the arrest. Now, there are talks of a use of force investigation. For some, this is what happens to you when you’re on the U.S. Marshalls 15 Most Wanted List.  There are even some meme’s on Facebook. There are others though, that proclaim the killer was not being actively sought after until Lt. Debra Clayton was killed. They wonder how this fits into other police brutality cases around the country and the Black Lives Matter Movement as a whole. If that wasn’t bad enough, Donald Trump, a perceived racist, is our new “law and order” President. One thing is for sure, this case was not about a man that the community wanted to protect. Lt. Deborah Clayton was the daughter of the African-American community and, like any parent would do, we continue to mourn the loss of our beloved child!