I believe the Trayvon Martin incident has provided us with new terminology and the understandings that we have derived from the trial have provided us with clear rules of conduct within the framework of our existing laws.

Trayvon Terminology
From Trayvon has come a descriptive moniker for a very important class of Americans. It was shared with us by the colorful Rachel Jeantel from those final remarks from the young man as he was being pursued by George Zimmerman: Creepy A.. Cracker! It's perfect for it is pregnant with so many layers of useful applications. For our purposes we will label them "CAC's" and before you think I am going in some racist tangent let me say right off the bat that I use the term to describe a class of White Americans who have organized to make laws and policies, implement them, enforce them, adjudicate them and punish those who run afoul of them to the detriment of people of color. CAC's include the legislators, the criminal justice system with prosecutors, judges, police forces and the penal system - everyone along the legal continuum.

These CAC's made slavery the law of the land for over 200 years, determined that Blacks would count as three fifths of a human being, fought a Civil War for the right to retain the laws of slavery, successfully responded to the Emancipation of slaves on the state and federal level by instituting Jim Crow laws of Separate but Equal everything from water fountains to every level of education, public accommodations, the military and even professional sports for another 100 years. CAC's devised a neat system of Jurors of Peers which meant in a practical sense that almost no Southern White person would ever be convicted of any crime against a Black person (funny how efficiently it still works in 2013). They also instituted laws that made it difficult or impossible for Blacks to participate in exercising the right to vote and illegal to marry someone of the White race. And now we get to see a new generation of CAC's use every level of legislation and court systems to dismantle every legal gain obtained by Blacks over the past 50 years and to utilize targeted sentencing laws to incarcerate more Black men today than were in slavery.

Amazingly, we are then admonished to respect the Rule of Law and the verdicts that derive from those laws and juries. I'm pretty sure over the past week I have heard a hundred times that "It may not seem moral that an unarmed teenager minding his business could be shot in the heart by the self-appointed Neighborhood Watch volunteer but legally George Zimmerman is not responsible and since the Jury has spoken we are expected to Respect the Rule of Law."

Zimmerman Rules
The trial may be the most scrutinized one in history and has brought an extreme level of clarity to all of us on things like Self Defense and Stand Your Ground laws. We learned that it is not illegal for the Community Watch Volunteer to be armed with a 9mm pistol with a bullet in the chamber while legally profiling a kid. It is not illegal to stalk him by car and get out of the car and follow on foot and initiate a verbal confrontation no matter how scary it is to the child being stalked in the dark. We have also had the Zimmerman Law clarified that if the skinny Black child scares you into feeling you are in danger you don't have to stand around and wait to have your head bashed, it's perfectly legal to shoot him in the heart and ask questions later. You really don't have to have any injuries because the law emphasizes how you assessed your level of danger. We also learned it's a lot more convenient for you if actually kill the child so that the only version of the incident will be the one you give.

Practical Steps that We Can Implement Using the Zimmerman Rules
Our urban neighborhoods are generally not the safest in the country, so I would offer that we are really the most in need of some Armed Neighborhood Watch Volunteers. There are too many guns in our neighborhoods but they are mostly in the hands of young guys shooting each other trying to make a living in the drug trade, so we need some guys and gals that have been trained by the military, police and security companies to keep watch. They should be thoroughly trained in Zimmerman Stalking Rules.

It's also becoming a cause for concern that since the first election of President Obama White Americans have been attempting to buy up all the guns and ammunition they can purchase. I've even seen Evangelical churches providing classes for Concealed Carry Permits. We can only guess as to their real motivation but it's beginning to make me feel a little concern that we are probably vulnerable if CAC fever spreads.

I have been comfortable most of my life with being the first Black person in a neighborhood, or company, or resort but I must admit that on the Saturday afternoon of the Zimmerman verdict my family was in a restaurant in Winter Springs, FL about 15 minutes from the Sanford Courthouse and for the first time in many years a wave of fear came over me and I began to hope the verdict didn't come while we were the only Black folks in a room with about 250 people.

If we really want to get a good dialogue going on the CAC laws in this country here is a suggestion. Get the addresses of a representative sample of the CAC's in your local, state or federal legislatures and assign one of our Neighborhood Watch Volunteers to follow them a few days doing the Zimmerman Stalk. It's even legal for them to actually go up to them and ask what they are doing in that neighborhood. It would be best to Zimmerman a few that sponsored Stand Your Ground Laws, or Voter ID Laws or who have strong feelings about Affirmative Action Laws. Doing the Zimmerman Stalk to a few CAC talk show hosts would really get the word out about the campaign quickly. Remember, it's all legal. And try not to get yourself scared or trigger happy!

Remember "Vengeance is Mine, saith the Lord!" 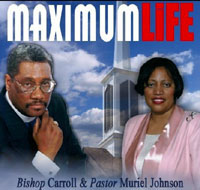 Bishop Carroll Johnson, Jr. is the Founder of the Maximum Life Churches of Baltimore, MD and Orlando, FL. He is the Diocese Bishop of Florida for International Bible Way where he is a member of the Executive Board of Bishops. He resides in Orlando where he is joined in ministry by his wife of 43 years, Pastor Muriel Johnson.