Ya Know, Maybe Creflo Does Need That Jet After All (humor)

Ya Know, Maybe Creflo Does Need That Jet After All (humor) 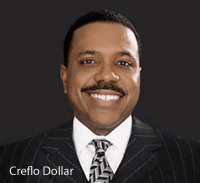 by Joycelyn Harrison Henson
Nigh see!!! I was keekeeing when I heard Rev. Creflo Dollar was soliciting funds for an airplane. I kind of thought it was a joke, as I actually thought he already owned a plane. But I also thought: If he does not already own one, then maybe he does not need one. Surely he could sit comfortably in economy, business, or first class.

Plus, I thought it would be good to have a Man of God amidst the people. However, after this morning's experience I have changed my perspective.

As I bee-bopped and maneuvered my way down the aisle of the 747 jet to row 39, I hit at least ten

(10) people in first, business, and economy classes right in the head. My bags, arms, and body (I was gonna say hips but didn't want to open myself up to those jokes...too easy) were all over the place. Surely, I am NOT the exception. Folks sitting on the aisle MUST get hit in the head at least twice when the plane is loading. That ain't right. And it wouldn't be right for Rev either.

But then I thought maybe he can request a middle seat, which is what I had during the first leg of my flight. I had the pleasure of sitting between two people. My arms and legs were sooooo in their personal space. I know they were wishing I would be still, but hell, I was terribly uncomfortable. In fact, I am seriously thinking of penning a note to that Delta CEO who was in the video saying my comfort is important to him. He needs to know that I need about another 2 inches added to the middle seat. Nonetheless, if I was uncomfortable in the middle seat, being sandwiched in and actually touching strangers, surely that would not work for Rev. We don't want him uncomfortable.

Now that leaves the window seat as an option. But everyone knows that the person who sits by the window experiences "low-key" hate (learned that term from The Manchild) when he has to cross his seat mate(s) to go to the rest room. And let's face it, we don't want Rev having to face undue hate.

THEN on the first flight, there was a toddler yelling, "I want OUT" for the first 15 minutes of the flight. No lie. Straight 15 minutes, top of his lungs, crying, "I want out!" Dig it. At that time of morning I wanted to cry too.

Of course, with 4 gremlins of my own - who seem to take pleasure in showing out at the most inconvenient of times (i.e., a confined airplane) - his cries didn't bother me too much, as I knew he was scared but safe. But I did pray peace to his mom's spirit the entire time because I could relate. I know she knew some people were thinking unkind thoughts about her child's behavior. And that ain't a good feeling.

Nonetheless, since I was in perpetual prayer for a mom I did not know, surely such unsolicited prayers as this must be required often. Now what if, The Right Rev was sitting there, might he be forced to pray for others rather than sit quietly and reflect on the thoughts of his choosing? Why should he be moved to intercessory prayer?

My, my, my - funny how experience can convict a haughty heart and mind such as mine. Let me go find this site and make my $5 donation. I see his point so much more clearly now. It is hard to focus on YOURSELF when there are so many people around who could use a word/touch/prayer from On High.

Now since I am penning these thoughts while in Airplane Mode, I may never post this. BUT if I do, here's my disclaimer: I don't really care if he gets an airplane. He isn't my pastor; thus, I don't have intimate knowledge about the need or legitimacy his request. So my ramblings are just views from where I sit. But after this morning's trip (literally and figuratively) I do find Rev's fundraising request for a plane rather amusing. It seems to me that he would miss some valuable opportunities to love God and serve others.

Joycelyn Harrison Henson is an educator and works for the Orange County Public School system in Orange County, Florida. She is also a mother of four and is very active in her community.