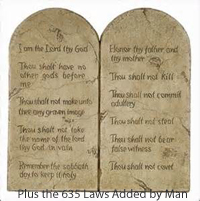 The point is, that it is the natural tendency of man to amend what God said with what "they" think about

what God said. Therein, lies the rub, because what "they" said about what God said becomes the law that the children of Israel prioritized and begins to try to keep. I believe that God waited until he had created everything that was necessary for man to exist on the earth before he created Adam because he wasn't interested in Adam's opinion.

We make mountains out of mole hills. We make little things big and big things little. We major in the minors and minor in the majors. And somehow try to make that all sound like its God. Man is incredibly ingenious at complicating the simple with superfluous rationalities.

To avoid this tendency, which I am just as susceptible to as anyone else I attempt to practice the discipline of "coring" Coring is the act of cutting to the center of a situation or issue. Experience and skill is required to get to the core of a problem where the birthing seeds of the issue or situation exist.

All too often we become preoccupied with the skin of a thing, the outer layers of an issue. You can cut off your fingers trying to peel an apple so close that you miss cutting into the substance of the thing.

If you and I could began to address the core issue that impacts our lives, our ministries and our significant relationships, how much heartache, difficulty and relationship chasms, might we have avoided?

Paul addresses this problem when he talks to Timothy, his son in the faith.
1 Tim, 1 4-7.
4 Neither give heed to fables and endless genealogies, which minister questions, rather than godly edifying which is in faith: so do.
5 Now the end of the commandment is charity out of a pure heart, and of a good conscience, and of faith unfeigned:
6 From which some having swerved have turned aside unto vain jangling;
7 Desiring to be teachers of the law; understanding neither what they say, nor whereof they affirm.

My initial thought for today is to encourage you to stick to what God said. And don't let the situation, compliant, problem, or anybody's religious or philosophical gobbledygook distract you from what really matters to your calling, mission and life purpose in this world and in the Kingdom of God -Pastor Joe Flores