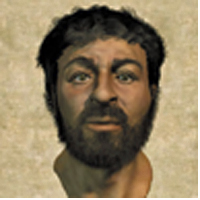 by Gregory Dean
In this Easter "Resurrection" Season, I remembered last year's Christmas spat over whether Santa was "white". I thought the bicker was a non-starter. After all, any well-informed believer knows that Santa is definitely a "fat white guy" who'll dis you if you're bad, and lavish you with toys and gifts if you've been good. Right?

Now when it comes to Jesus . . . well, we've got a little thornier problem of identification.

Modern Christians around the world have been indoctrinated to see and accept Jesus as a benevolent, bearded and long haired, hippie-styled Jewish (white) guy. The Savior and Redeemer of Jews and Gentiles. In this reality, you won't see most Euro or African American or other Clergy asserting a "non-white/Jewish" Jesus to their congregants. That would be serious heresy, but why?

The question of Jesus' race and ethnicity regularly surfaces in discussions of the Abrahamic religions because there is no full physical description of him in the Holy Bible or other sacred writings. Fortunately, modern science enables us to consider the expert opinion of British and Israeli forensic anthropologists about who the "real Jesus" might have looked like. I indulge you therefore, to exam their reconstructed image of Jesus portrayed at the top (Courtesy of BBC Photo Library).

When we juxtapose the political ideology of the traditional white Jesus to the experts' historical Jesus,

we have a dark-skinned, scruffy, rabble-rousing Semite "brother-man". The Son of God with his band of trusty disciples fighting to liberate their kin from the decadence of the day and the tyranny of Rome and the Sanhedrin.

By now, this former seminarian can hear an indignant, but familiar retort coming into earshot: "What difference does it make what he (Jesus) really looked like?

Paradoxically, it probably makes a difference at once to Christians and others who love the truth, and contrarily, to those bent on keeping the European-imagined Jesus just the way he is, truth and science be damned.

In the former instance, true Christians would want to know that they're practicing a religion of integrity. As such, they should want to know Jesus' true identity and physical appearance. They should want to celebrate a correct record of Jesus' life and times. Of course, if they made the mind adjustment, they'd consequently have to change their worship liturgy and church iconography to portray the image and essence of the real Jesus.

For the latter folk, their likely first impulse is to close ranks on any threat to the Christian status quo. Their allegiance to white Jesus comes out of a long and treacherous Church History. This history places Jesus at the center of a peculiar political-cultural context that has been engineered with certain features, and for a purpose. The main aspect of that context in this case refers to the theft, alteration, and appropriation of cultural imagery. In this case, the Europeans recast Christianity as a religious doctrine they could use to assert Euro cultural dominance. And Church Leaders and commissioned artistic masters of old, by Europeanizing Jesus, admit their vicarious claim to the real Jesus. A more recent example of this came when European settlers in the New World justified the heinous system of African Slavery using biblical scriptures. Hummm.

No doubt, the scientific foundation for a black Jesus won't dissuade most folks from holding fast to their ironclad belief in a white Jesus. That's the power of indoctrination. For them, Jesus remains a superior white iconic religious figure, and they would balk at any suggestion that a black Jesus could ever supplant or be superior to white Jesus. Many of them would likely discount the science cited in this article that asserts Jesus as arguably both the most famous person in history and the greatest black man who ever walked among us. While I understand their objection, I tend to lean towards the truth, no matter how outrageous it might seem to the indoctrinated.

During this Easter Season, over two millennial after his death and resurrection, we in Christendom celebrate Jesus as the risen Savior of Humanity. I take this opportunity to clarify the likely appearance of the historical Jesus given his birthplace, language, race and ethnicity, and spiritual leanings. And let's not forget the tremendous work of experts who recreated his likely appearance. Millions like me understand that Jesus likely looked much different from the Europeanized image most Christians have been indoctrinated to imagine.

We can all agree that Jesus stood and give his full measure of devotion for the cause of freedom and justice for all humanity. Likewise, there have been many other great black men who stood and were martyred in a similar noble cause. They're our grandfathers, fathers, sons, brothers, uncles, nephews and cousins. They're our proteges, mentors, and heroes. Like Jesus, many were also crucified --- but with guns, sword, and on burning crosses and trees in nations that preached brotherly love, yet practiced Slavery and other forms of oppression that are anathema to the precepts of Christianity.

Yes, I've known and still know great black men . . . but the greatest black man I know happens to be the Real Jesus.