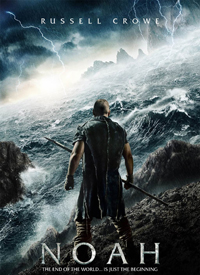 By Pastor Bridget Norvell
COME OUT THE BOX: I had the opportunity to see this dynamic movie. If we took off our religious hats and put on the spiritual hat, we would see the true concept of what this movie is saying to us as a people; then the debates of the movie would stop.
The movie might have been directed by an atheist, but it seems this atheist was one out of many that saw the corrupt intent of man.

After reading many of his interviews, the movie was not to be taken literally, but to be seen as one man's perception of the Word. And what a concept! I loved it; it took me beyond what I now read and know of what the Word says, to seeing what could be if we don't change our patterns. The movie portrayed man's negative emotions such as Rage, Hate, Fear, Cunning, Manipulative, and Deception mixed with Confusion. Then it also captured the positive feelings such as Tenacity,

The character of Noah did not know what to expect, but he followed that inner voice that allowed him to carry out his mission and no matter what, he was going to do it.

My favorite part of the movie was when he sat with his family explaining why the Creator, as they identify GOD in the movie, (the word they used for GOD might have been the politically correct concept, but it is truth because He is the Creator; we must remember God has many names). Noah explained the intent of what GOD wanted for man. I never saw the beginning of the Bible visualized in such a profound way.

Personally, I would love to get that clip alone to use for an unbeliever. As I said before I really feel we should give this man his props for putting together a spectacular motion picture. He has drawn millions to the Bible. Bible Apps are being downloaded like crazy. Just like any movie that has spiritual belief or religious undertone like Book Of Eli, The Matrix, The Adjustment Bureau, Bruce Almighty, Evan Almighty...etc., instead of finding fault, maybe thank GOD for it all. He is in control. God does not change but his method sure does (Who says this was not HIS method?).

For the ones that have not seen the movie, I hope I helped some of you that was talked out of watching such a great dynamic movie; a great new move of GOD. My advice for you is see it for yourself, see it with a CONCRETE THINKING spiritual eye and see what is GOD saying to you. GODSPEED