by Pastor Joe Flores
In 1st Chronicles 17 David contemplate building a house for the Lord. He looks at the size and magnitude of his own house and compares it to the tent that serves as the central place of worship gatherings for the children of Israel.

One night as David and his personal prophet Nathan are chilling in his blinged out palace, David bounces the idea of building a house for the Lord off the prophet. Prophet Nathan is almost giddy about the idea. He immediately gives David his full unreserved blessing and endorsement of David's Temple construction project. In 1 Chron 17:2 Prophet Nathan tells David, "Do all that is in thine heart..."

Over the years David has come to trust the prophet's insight. David couldn't have been happier. This 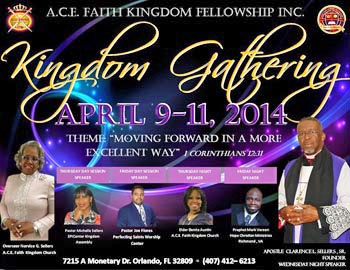 isn't the first time David has considered this mammoth undertaking. This project has been on David's mind for some time. He has already consulted his architects and engineers. He has selected a site and more than likely had some plans drawn up. Everybody David has consulted raved about the awesomeness of David's Temple building project.

Today, he finally feels comfortable enough to run the idea by the one person without whose approval he will not do it. Imagine the backslapping that went on that evening when the trusted Prophet gives David his blessing of approval for the Temple building vision.

The only problem is that God had not yet weighed in on the question. As a matter of fact, God is the only one who has not been consulted thus far. There were no prayer meetings. There was no fasting or consecration for direction. There was no search of the Word of the former prophets or the Torah to see if the Lord had already included David's building project on His prophetic agenda. This was all David's idea. David had initiated this idea based on his own guilt for the immense blessing of God upon his life and the haunting knowledge of the many times he had utterly failed God and still received mercy.

To David's cohorts and contemporaries David's vision seems noble, honorable, even holy. But God always knows what's really going on in our heart. God is sovereign. God knows what we can only guess about. In God's holy omniscience He refuses to allow David to start what He cannot finish. In His divine foreknowledge God refuses to allow David to enter a Temple building project that wasn't God's idea in the first place.

Late that night. God wakes up the previously approving Prophet Nathan. Late that night after everybody else has spoken, the Lord clears his Holy vocal chords to speak. Late that night, after the royals, the elite, the confidants, the adjutants and the executive assistants to the King have sanctioned David's desire the King of Kings, who is the judge of everything is ready to issue His excutive order.

In the dark of a long night for David and an even longer night for the Prophet Nathan God speaks.
3 And it came to pass the same night, that the word of God came to Nathan, saying,
There are times when God allows us to get away with a lifetime of our own ideas. There are times when God winks at our carnal parade of noble projects, religious endeavors and good ministry ideas. But at the end of the day, those who are anointed for generational impact are being clocked on a different timeline than the average transitional leader. Those who are significant to God's divine legacy of inheritance of His people are held to a higher standard judgement, obedience and behavior. Especially, as we mature in our gifting, leadership responsibilities and personal spiritual processing. There comes a time when God draws the line and declares, "I will not allow you to hang yourself with the rope of your own carnal ambition.

We make plans in the light of our own dreams, our own thoughts, our own desires, but God speaks to our future out of the obscurity of our long dark nights. God committes a B&E into our neatly contrived schedules, plans and agenda's so that He may properly and in order, usher us into the bright glory of His destiny plan for our lives.

3 And it came to pass the same night, that the word of God came to Nathan, saying...Pastor Joe Flores

This is Part 1 of "Nathan's Opinion, God's Interruption and David's Destiny" Join me on my new blog for Part 2 of this penetrating Word from the Lord.