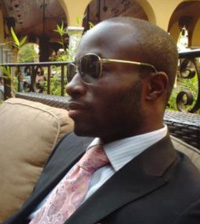 By Camara Williams
As most may remember this past July the local chapter of Alpha Phi Alpha and FAMU College of Law hosted a forum on the Stand Your Ground law, among our panelist were Senator David Simmons and Senator Chris Smith. Both who were the leading voices on both sides of the law. This forum was the first time that both were in the same room to discuss the law since the verdict, and this provided place for them to articulate their ideas and possibly come to an understanding in search of common ground.

Last week Tuesday, Senate panel lead by David Simmons and Chris Smith voted 7 to 2 approving revisions to the state's self-defense law, the bill approved Tuesday requires local sheriffs to issue guidelines to neighborhood crime watch programs, particularly that participants are prohibited from pursuing and confronting suspects. It also further clarifies existing language in 'Stand Your Ground' that individuals acting as aggressors are barred from using the law as a defense, and removes language so that any bystanders injured by 'Stand Your Ground' fire can pursue civil action.

So what is defined as an “Aggressor”?

“The First Aggressor Rule” is a rather simple common law rule that says “a defendant who provokes an encounter as a result of which he finds it necessary to use deadly force to defend himself, is guilty of an unlawful homicide and cannot claim that he acted in self-defense.” Florida has codified the “First Aggressor Rule” into Florida Statute 776.041(2) (Use of force by aggressor), which states: “The justification [to use self defense] is not available to a person who initially provokes the use of force against himself or herself.”

So in other words, a person like George Zimmerman (who many consider the aggressor), would not be able to confront a suspect without proper training. Furthermore, if based on the evidence provided a suspect is considered an “aggressor”, then you will be barred from the self-defense claim of “Stand Your Ground”.

While ultimately Senator Chris Smith intention is to repeal the entire law, it is fantastic that both sides were at least able to find common ground in order to change a flawed law. I like to believe the spirit of compromise started at our forum, with Senator David Simmons even admitting afterwards that he was willing to talk and listen to the opposition.

Attorney Camara Williams
Office: 321-332-6136
"Creating A Success Story, One Client At A Time”
If you or anyone you know has a criminal issue that needs to be resolved, please have them contact our office.

(Disclaimer- Because of the popularity of ‘free legal tips’ (my inbox messages) I have to note that my tips are strictly Florida Law based, and therefore should not be assumed to apply to your local jurisdiction. Furthermore, a tip taken from my facebook page does not constitute any form of ‘legal advice’ in regards to any specific situation and therefore does not establish an attorney client relationship. You must consult with an Attorney if you want a specific need and/or question answered.)