Talk To Your Doctor BUT, Know Your Own Body

Talk To Your Doctor BUT, Know Your Own Body 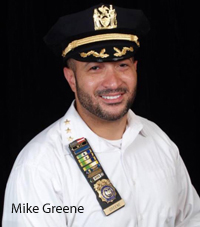 by Mike Greene
I want to share a mystery medical issue I had, hoping that my story may save some lives out here. Please take just 60 seconds of your life to read this and share it. This might truly save your life or the life of a loved one, it saved mine:

In 2010, while investigating the Times Square terrorist car bombing, something hit me. It wasn't external, rather internal. As I stood on west 46th at and Broadway in my suit and tie in front of our temporary command center, I felt a sharp pain in my left arm. This was very odd and out of the blue. I was 39 years old and in the best shape of my life, working out 5 days per week. I know that as the first sign of a heart attack, but no way, not healthy me.

It must be some muscle related issue I thought. No. Within a few seconds, BAM, like a ton of bricks I

felt heavy and my heart started to race about 200 beats per minute (as I checked my own pulse). The feeling I had was that it was game over, not passing out, but game over, good by life. No way though, I was super healthy. It had to be some low blood sugar issue or something.

I used all of the strength I had to walk across the street and get some sugary drink at w cafeteria. I took a few sips and felt better. Phew! That must've been it I thought. A few minutes later it came back. 200 beats per minute. I looked at my partner and told him I need to go to the hospital. He looked at my face and I saw fear on his face. He said yes and then told the commander where we were going, the commanders face looked the same. So we get in the car and he starts driving the 13 block drive to the hospital. Of course he misses our turn and we end up on a bumper to bumper traffic side street. I was feeling fine again, when it hit me again and I told him, "You better hurry up or I might not make it." He hits the lights and sirens and gets on us on the sidewalk. Of course when we get to the hospital I feel fine.

They put me in a bed in the ER and hooked me up to several heart monitoring machines. A tech performed my EKG and began to walk out. I asked her to tell me how it looks. Very casually she looked and then screamed, "Oh Lord!" and ran out. A moment later a team of doctors and nurses were at my bedside. They stated that they were going to take a blood test that would take several hours to complete, to determine if I had a heart attack. Long story short, I felt fine the entire time I was in the hospital. 7 hours later they said my blood work came back "no heart attack." They released me with a diagnosis of having a "fainting spell".

Over the next two days, I was off from work- my regular days off. I lived alone. The next morning I woke up to a slight tingling sensation on the left side of my face and left arm. What!? I knee this to be a sign of stroke. Luckily I watched some educational TV programs and knew the power of aspirin. I took an aspirin and a few minutes later the sensation went away. I made an emergency visit to my primary care doctor. She was concerned and sent me to a cardiologist and neurologist. Over the next two weeks I went to both a total of 10 times, conducting every test in the book- brain scans, CAT scans, heart sonogram, stress test, blood work for diseases and cancers, etc. Both docs could find nothing wrong with me. I had a few more incidents of the heart racing and numbness- each time alone and taking aspirin made the events end/go away.

What did each doctor conclude? I was having anxiety attacks. I have always been active and healthy. As a police detective in old NYC, surviving close quarter shootouts, high speed foot pursuits, tussling with armed robbers, dramatic building and hostage rescues, surviving the collapse of the South Tower on me on 9/11/01, on the frigid Hudson River to rescue passengers on a U.S. Air flight, etc. I've had many moments of what could've been high anxiety but were not.

I told them this was not anxiety. I explained to them that I could actually feel one of more blood clots getting stuck and or traveling in my body. They told me that's impossible because a) the tests don't show that and b) you don't have nerve endings in your veins, so you can't feel clots. But sure enough, into week three, a final blood test result came back. It came back showing I had a blood clotting condition. My blood now wanted to thicken and clot. God damn it! I had told these docs this for weeks - no test needed, just feeling my own body. I would be dead now had I not known about and taken aspirin- a blood thinner. So they put me on Plavix - I took myself off of it and started taking one aspirin per day.

My primary care doctor made one very prolific statement, she stated, "We don't know why this is happening, but it's as though your blood thinks it's fighting off a disease or something." - keep in mind all for my tests for diseases, etc came back negative. I also had them test me for parasites.- also clean results.

So for the next several years, until now, 2015, I've taken one aspirin per day, to live. I took note though that daily or weekly or monthly, I would have severe abdominal pain, lasting hours, or wake up w full body aches and pains or feel lethargic. This happened for years. I took note of the things I ate before each incident. I took note that usually it came after I ate significant amounts of ice cream, bread, pasta or beer. Let's fast forward to a few weeks ago. The pain hits me again but worse than ever and it's going into hour number 8. I think of what I ate. What stood out was three huge pieces of bread. I'm aware of gluten allergies. I had been praying to God to help me with this condition- praying very hard. All of a sudden it hit me. Gluten allergy is an allergy. What do you take when you have an allergy? Antihistamines. I swallowed several Tums and they had zero affect. If I took a Benadryl and it worked, well, it must be a gluten allergy. I took the Benadryl. Ten minutes later I felt fine. Bingo- self diagnosis. I have a gluten allergy. I go to a doctor and get tested to confirm it.

So, for the next few weeks, up until right now, I have felt fine (eating a gluten fee diet) and have stopped taking my daily aspirin. Let's go back to my doctors prolific statement, "It's as though your blood is trying to fight off a disease or something and that's why it's clotting." Well, there you have it. It was. I was eating gluten all day and probably everyday. My body was trying to fight it off for years, daily. My blood was doing its job and trying to fight off this allergic invader. I later learned that if left untreated, gluten allergies can develop into diabetes, cancers, heart attacks, low blood pressure, strokes, etc.

So the key to my story is that a gluten allergy almost took my life several times, aspirin will save your life if having a stroke or heart attack, and gluten gave me a rough quality of life for years, and doctors had no clue in their diagnosis.

So PLEASE take my story to heart. Get yourself checked- if you are experiencing some health issues. I can't be the only person this has happened to. How many of you right now might be having severe health issues simply because of an easily curable gluten allergy??? Try one of the following: go a day or two w out bread, pasta, beer, etc (most but not all have gluten) see how you feel the next day or two. Go to your doc and have the test done. If you have similar pains as I had, and aren't allergic to Benadryl, take one. If your pin goes away, bingo. - you most likely have a gluten allergy. Also get tested for celiac disease.
Take care, Mike Greene