Killing Us Softly: Arresting the New #1 Cause of Black Death

Killing Us Softly: Arresting the New #1 Cause of Black Death 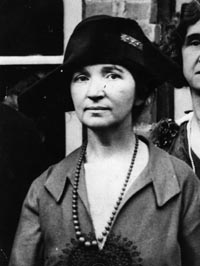 edited by Greg Dean
Truth be told, the #1 killer of blacks may not be what many think it is. We know the familiar culprits: HIV/AIDS, cancer, stroke, diabetes, heart disease, obesity, and homicide (think Trayvon, Jordan, et al). As devastating as these scourges have been, a new and more hideous cause of black death now occupies the top spot.

So without further adieu, allow me to solemnly introduce you to the new #1 killer of blacks --- abortion.

Consider this backdrop.
Nearly a century ago, Margaret Sanger (pictured above) founded Planned Parenthood to help white women seize control of their sexual and reproductive power from white men. During the Harlem Renaissance, she began conducting birth control experiments on black women. Because she was a known racist and Eugenicist, many blacks questioned her motives. Undaunted, Sanger convinced black leaders of the day to endorse her "Negro Project". She argued that birth control would improve black health and reduce poverty. Not so fast, said some. Cynics suspected a nefarious extermination plot. After all, Sanger called blacks and other undesireables "'human weeds' and 'reckless breeders', spawning human beings who should never have been born." Channeling Hitler's Final Solution?

Fast forward to the 1973 landmark Roe v.Wade decision legalizing abortion. Planned Parenthood quickly pivoted with an abortion delivery system that performs over a third of all abortions each year, and generates average annual revenues exceeding $150 million. Not surprisingly, Planned Parenthood is the

nation's largest abortion provider. Ironically, nearly 80% of its abortion clinics are located in minority communities, where over 16 million unborn black babies have been aborted. Though blacks comprise only 12.6% of the population, black women obtain nearly 40% of all abortions. Had black women delivered their aborted babies, the current black population would easily approach 55 million. Has a black woman's womb become the most dangerous place for a black person to live?

The pandemic of black abortion exacerbates Moynihan's "tangle of pathology" of black male/female estrangement, single female parenthood, and the preeminence of Black Matriarchy. The data confirms the tangle. Blacks have a paltry marital rate of barely 32%, and an astounding 72% of black births are to unwed black women. And of all groups, the black population has the lowest projected annual growth rate at 4%. So what's to do?

There are five actions that might help arrest the black abortion pandemic.

First, given that black women are often cited as the most religious group in America, let's call on them to obey the Christian Commandment "Thou Shalt Not Kill" (KJV), and abstain from abortion as an act of faith. It will be interesting whether black women in the labor force will support or oppose Sebelius v. Hobby Lobby.