The Lynums Are Up To No Good 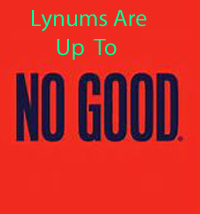 By C. Mark Hemmer
I have been following the race in District 5, since I read that the son was poised to run against his mother. Speaking of city commissioner Daisy Lynum and her son, Juan Lynum.

It seemed from the early report that he planned to run for Judge, but he never said which seat. Then he filed to run in his mother city commission seat after she filed and paid the filing fee.

By the way, I must mention that I am white and do not live in District 5. Sorry, but I thank God I don't have to live in that hell-hole. And, no one should under those conditions.

So, I begin to wonder what kind of kid is this that he would file to run against his own mother.

There are only two answers to this riddle. Either this kid could care less about his mom and is on a power trip. Or, he and his mom are up to no good.

Let me recount the story. The son, Juan Lynum, filed paperwork to run for the District 5 City Council seat on the last day possible. Yet his mother, city Commissioner Daisy Lynum, had already

filed for the seat she has held for the past 16 years.

The kid said he had planned to run for judge. But during a strategy meeting with his advisers, he decided serving on City Council would fit him better. His advisers' advice was to take out the mom. Give me a break. And to boot, the meeting was at the home he shares with his mother. Where was mom?

He said, "We figured late into the night that this would be the better thing for me to run at this time and for her to retire." Wow! If this is true, this kid is scary.

While the son was having these thoughts and plans, his mom, Daisy Lynum, turned in the necessary paperwork and paid the nonrefundable $1,481 filing fee to seek re-election and said at the time she was fully committed to the race. Her exact words were, "My work has only just begun."

The other flip of the coin is that this is all a big scheme to keep a Lynum in office. The mom is 67-years-old and not in the best of health. So the son was able to report, "We won't see two Lynums on the ballot. I will withdraw come Monday if it's not completely resolved within the next 72 hours exactly how this is going to play out."

The next day, the son said his mother would withdraw "after she confirms for herself that I have qualified."

Bingo! That is it. She had to hold on until the son qualified. There is the issue of the son living in Tampa with his wife and daughter, and not in district 5 with the mom. Mom wanted to be sure the city clerk accepted the lie of Juan Lynum living in district 5, before she dropped out. Of course, they both have denied any political machinations.

Related: The Voters In District 5 Are Being Hijacked and Hoodwinked!!

But thinking people clearly understand what's up. The mom is stepping down and trying to clear the way for her son. Who by the way was rejected by the voters when he ran for the County Commission back in 2006.

Commissioner Daisy Lynum has respresented that area for the last 16 years. Instead of progress the area looks plighted. In my way of thinking: if you can't get it done in 16 years, you are not going to get it done.

This scheme of the Lynum's is wrong. It is wrong legally. It is wrong morally. It is wrong politically. And, it is wrong for those poor people who have to live and raise their children under those conditions. The Lynums should step aside and let someone else have a turn at the wheel.